Since I study mushrooms I sometimes receive images from people asking for identifications. One of those images was something I had never seen, nor seen anything in the literature that vaguely resembled it. It was a rose coloured cup fungus with a papilla in the centre, and was growing on the trunk of a living shrub. The bark of this shrub was perfectly healthy, showing no signs of pathology.

The first possibility that came to mind was a species of ascomycete cup fungus, but to my knowledge none of those has a little bump in the middle. The next possibility was a bird’s nest fungus. These often grow on wood, and have peridioles, spore bearing structures, in them. They, however, have more than one peridiole, and do not grow on living trunks. It was a total mystery to me, so I advised the enquirer to contact several people with a better mycological knowledge than mine.

I was very intrigued by this fungus. Maybe it was a totally undescribed genus. The description of its location was beside a trail close to where I live, so I decided to set out on an expedition to locate it. Such a find should be documented with a herbarium voucher. Since I walk this trail, and know its fungal flora very well, it was perplexing that such a unique species could be growing there.

Upon setting out I met somebody who asked me where I was going, and I explained that this very unusual cup fungus had been seen along the trail, and I was going on a search for it. She replied that she had seen them a few days earlier, and that they were very clever. Somebody with a knowledge of mycology must have made them!

After a careful search along the trail, there they were. Seven of them on a vine maple (Acer circinatum) trunk surrounded by the cat tail moss (Isothecium myosuroides). Creatively constructed from pink plastic, with long stems inserted into the epiphytic moss carpet. 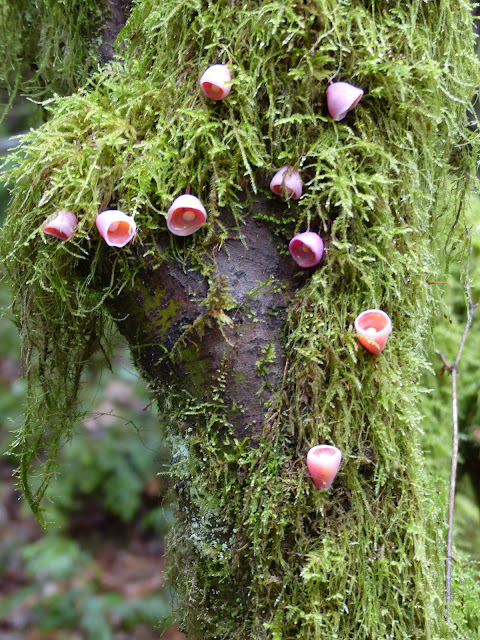 The amazing plastic cup fungi. Artificial ascomycetes in the prime of maturity. It brought to mind the Piltdown man hoax of a century ago, or the photos of flying saucers that used to intrigue me when I was young. The images certainly looked very real. How long will they fruit on that tree?
Posted by Terry Taylor at 21:26

Terry Taylor
Terry Taylor has studied the ecology and flora, including mushrooms and mosses, of southern British Columbia, for several decades. Terry is a member of Nature Vancouver, Native Plant Society of BC and Vancouver Mycological Society.